What Was the Coffee & Donut Riot? 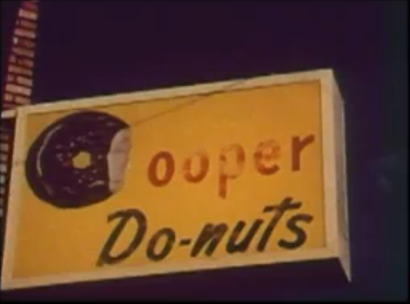 http://www.amoeba.com/admin/uploads/blog/Eric_B/CooperDo-nuts.png
Cooper's Donuts was a popular [especially with the LA Police Department] all-night eatery on Main Street in downtown Los Angeles in the 1950s and 1960s. It was situated between two (also popular) gay bars, Harold's and the Waldorf, and therefore became a common late-night hangout place for LGBTQ+ individuals. It was the hub for transgender people, queers, hustlers, drag queens-every social “deviant” under the sun. Because it was one of the few venues where transgender women could safely reside, it was easily a target for cops.
On this particular spring night in May 1959, two cops decided to spontaneously check IDs. The outcome of their check was the arrest of about five customers. Much like the Compton Cafeteria riots, and happening only a few years prior, the rage and frustration demonstrated by the many night customer of Cooper’s illustrated their impatience and intolerance for police brutality consciously directed towards LGBTQ+ individuals simply looking for the company of people just like them. In the patrons’ clash with the police, they utilized items from the coffee/donut shop itself. This included coffee, donuts, spoons, cups and so on. The officers had no choice, but to retreat and with their return were more officers. The riots ensued and lead to the temporary closure of Main Street. Although smaller in scale to that of the Compton Cafeteria riots and Stonewall, the Cooper’s Donuts riot was the first tip off to general police insensitivity and violence towards LGBTQ+ people.
Powered by